2999 AD humanity is exploring space, and we are part of the IF (or Interplanetary Federation). Here we meet Wendicka Lovejoy, (adopted) daughter of admiral John Lovejoy and her surrogate sister Crystal McLeen finishing their training to be officials in M.E.T.E.O.R. The job every young boy and girl dreams of. But it goes horribly wrong, and Crystal would have died if an unknown person didn't kidnap her to turn her into a cyborg. Both girls retire from their dream job as a result.

One year later Wendicka is an engineer working in the maintenance of Excalibur, the most important space station of the IF, the symbol of the IF's "invincibility" (it was named after King Arthur's sword for a reason). Crystal works as a barmaid in a bar within the same station. But then the station, always believed to be impenetrable gets invaded, by Astrilopups (an alien race enemies of the IF) and mindless cyborgs wearing implants pretty similar to Crystal's. What is going on? Is it connected with how Crystal became a cyborg herself?

The answers are out there, somewhere in space. Can you help the two girls find these answers?

Wendicka Lovejoy
(Adopted) daughter of admiral John Lovejoy. Wendicka does not know anything about where she came from. She's a tomboy with a very straightforward and tactless personality, and Crystal often comments she shouldn't be so "rude". Wendicka has the very bad habit to go into a complete panic when things do not go the way she planned. She always means well though, and is very intelligent, and an astounding engineer. Her skills with technology bely her age. Wendicka suffers from a condition she calls a "curse" (due to lack of a better word), causing her to be unable to eat and drink, and allowing her to feed on electricity.

Crystal McLeen
Crystal has been Wendicka's friend since she was an infant and the two girls consider each other as sisters. Crystal became a cyborg due to an otherwise fatal incident. Nobody knows who turned her into a cyborg, but whoever did saved her life. Crystal is in all sorts of way the calmness contrasting Wendicka's tomboyish behavior. Although Crystal is a bit naive compared to Wendicka she often acts more mature than her on the moments that count. Crystal is a vegetarian.

Experimental Human Replica Unit (ExHuRU)
ExHuRU is an android programmed to protect Wendicka, much to her displeasure, as she doesn't want to be protected. As a robot ExHuRU lacks all sorts of emotion and is also unable to comprehend human irrational thoughts. Wendicka tries to get rid of him all the time, and she often acts extremely rude an offensive towards him, although he has no understanding of her rudeness (and ignores it as a result).

Yirl, son of Astrolon
In a bar somewhere on a forgotten planet the girls meet Yirl. Yirl is a a bounty hunter of the Klargin race, who makes a living by doing a lot of "dirty jobs" and winning people's money. He's hated by the IF and the people he won from. Yirl insists on taking Wendicka under his protection and Wendicka suspects he knows very important stuff.

Foxy Firefox
Foxy is a carefree Vulpin girl, making a living as a thief and prostitute. Foxy joins Wendicka and friends for fun out of lust for adventure. Foxy is actually a very bright and courageous woman, although she never took life too seriously. Foxy has a little "dragon", called Reggie, who was born in a laboratory when mad scientists were trying to play god. They did manage to create a dragon who is even able to breath fire, they only neglected to teach him manners, and as a result Foxy has a hard time keeping his rude behavior under control.

Xenobi
Xenobi is a Ji knight, ordered by the grand master to take Wendicka and friends under his protection. His devotion to "The Power" allows him to do many supernatural things (think of it as "magic" if you want). Xenobi is falling in love with Crystal from the first moment he laid eyes on her.

Rolf van den Broek
Rolf is a civilian of the former Dutch planet colony Nizozemska. As a result he has a lot of trouble speaking English properly. Rolf is a typical no-nonsense kind of guy who does what he has to do.

John Lovejoy
Wendicka's father by adoption and he does not have an easy relationship with his daughter. John is a very religious man, and Wendicka is an atheist, and Wendicka believes that is the reason for the awkward relationship, although she never realized that John always said that God have her the freedom to think for herself and to belief what she wants to believe (in other words, he never oppressed his religion onto her). The true reason is that John is overprotective, in Wendicka's views, and she's in fear of getting "caged".

Admiral Johnson
A female admiral. This 78-years old woman is not a woman to toy around with. She's very extremely strict and she's known for her authority, and some people in the IF think of her as an "iron lady". She does have a softer side though, and Wendicka will eventually find out.

Reggie Ryuda
Foxy's companion. Created in a laboratory. He's very extremely rude, and cracks bad (often sexually offensive) jokes, only to get kicked for it by Foxy. Still he's very intelligent and he DOES care for his friends, although he gives you a hard time acknowledging that.

Banika
An alien female traveling merchant who got lost during her travels. If you can get her out of her trouble, she will eagerly go with you and sell you her wares at a "special rate".

Sue McLeod
Rolf's girl-friend and she's basically everything Rolf is not. Like Rolf she lives on Nizozemska, and she's a first-rate blabbermouth and always extremely cheerful. When she gets mad she really goes berserk only to forget about it in a few minutes carrying on like nothing happens with the same cheerful mood. She is a hard worker and allows herself pretty little time for entertainment and rest. There is however more about her than you would initially think. 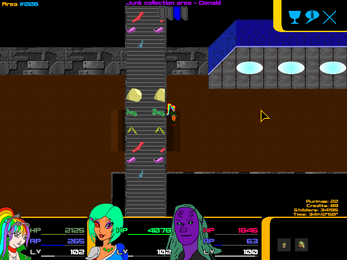 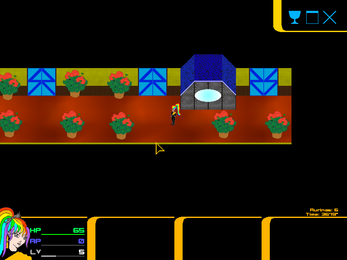